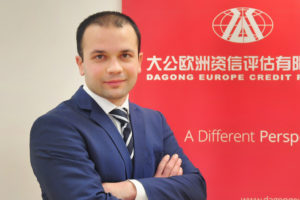 Mr Evgeni Petkov, CFA joined Dagong Europe in January 2017 as Associate Director in the Financial Institutions Analytical Team. Evgeni began his career in 2008 as graduate in Risk Management at DresdnerKleinwort/Commerzbank and gained experience in several departments within Risk Management in Frankfurt and New York.

Upon completing the graduate programme, he worked with the Exposure Management team, dealing with credit risk arising from derivatives and repo transactions. His last position with Commerzbank was Credit Officer – Financial Institutions, with focus on Latin America. From 2013 to 2016 he worked at VTB Bank (Deutschland) AG as a Credit Analyst covering a broad portfolio of financial institutions.

Evgeni holds a Master’s degree in Economics and Management Science from Humboldt University, Berlin and is a CFA charterholder. He is a Bulgarian native speaker, fluent in English, German and Spanish and has basic Russian skills.